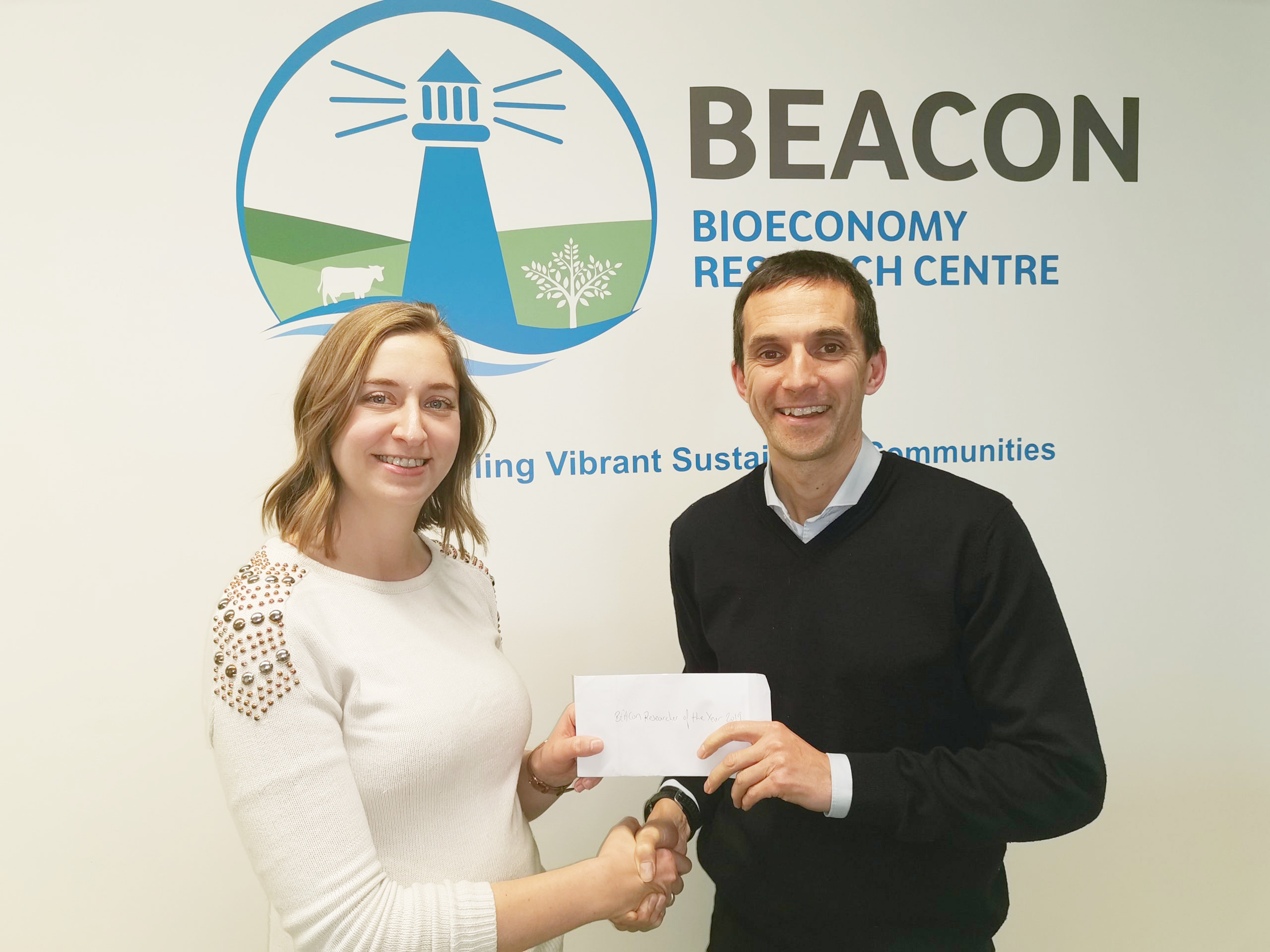 From one ‘Researcher of the Year’ to another

Dr Rosanna Kleemann has been announced as the inaugural winner of ‘BiOrbic Researcher of the Year’. The Award recognises early career researchers who have contributed significantly to the Centre’s research strategy in the past year. In 2019, Dr Kleemann achieved exceptional research outputs, combined with demonstrating a flare to engage the public with her research.

Centre Director, and recent recipient of the ‘SFI Researcher of the Year’, Professor Kevin O’Connor, presented Rosanna with the Award at a Ceremony that brought together centre members at University College Dublin on Tuesday 3rd December.

Rosanna joined BiOrbic and UCD as a postdoctoral researcher on ‘ABC Economy’, an SEAI and DAFM funded project, which aims to help farmers, food producers, and foresters in Counties Tipperary & Monaghan create value from their waste. Her role in this project is to propose potential technological solutions to assign value to bio-wastes through discussing opportunities and barriers with stakeholders through workshops and site visits. Rosanna’s research has the impact of reducing harvest losses and wastes, improving food security, and stimulating public discourse on resource efficiency and waste valorization.

Commenting on receiving the Award Dr Kleemann said: “I am delighted and honoured to have won the BiOrbic Researcher of the Year Award. I am lucky that I enjoy and am passionate about my work, especially since becoming a part of BiOrbic. The Centre has benefitted me greatly by providing funding application support, opportunities to engage with people from all levels of understanding of the bioeconomy and building a network of peers researching all facets of the bioeconomy.”

At the Ceremony, Professor O’Connor said: ‘As we come to the end of the year, it is a good time to reflect on our successes. All members have contributed hugely to the Centre over the course of the year and should be proud of their individual and collective achievements.’

‘It is with great pleasure that I announce Dr Kleemann as our inaugural awardee. Rosanna has proactively sought opportunities for new collaborations at both national and European level and contributed to the centre’s education and public engagement activities. She has also recently been successful in securing funding through the internationally peer-reviewed 2019 EPA Sustainability Call. This is a significant milestone in Rosanna’s career and one that directly contributes to BiOrbic. It is an achievement which all BiOrbic researchers can aspire to in the year ahead.’

Looking to the future, the Executive Director, Derek O’Brien, said: This BiOrbic SFI Bioeconomy Research Centre Award will be made annually to a PhD or Postdoctoral researcher to recognise the achievements of early-career researchers and highlight positive role models for others.’